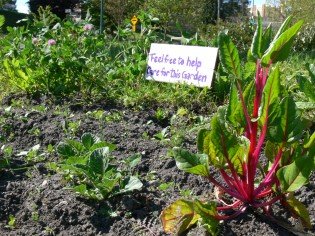 The 17th of April is the International Day of Peasant Struggle. On April 17 1997, after three months of protest for the defence of Mother Earth and for the cultivation of the coca leaf in Bolivia, seven indigenous peasants, including a child and its mother, were massacred. Today is the day, around the world people come together to network on how we can intensify the mobilization for the rights of peasants everywhere. This post is offered in memory of those who have and who are struggling for access to land.

I recently read On Guerrilla Gardening: The Why, What and How of Cultivating Neglected Public Space

by Richard Reynolds. It is a beautiful book full of fantastic photos of guerrilla gardening around the world. There are a lot of helpful and practical hints, tips and suggestions as well as the history of guerilla gardening around the world. This book is a great resource as well as a fun coffee-table book, not often do you find a practical coffee-table book like this one, I highly recommend you read the whole thing, but just to get you started here are some of my favorite passages from this fantastic book:

This is Guerrilla Gardening:
THE ILLICIT CULTIVATION OF SOMEONE ELSE’S LAND.

Most people own no land. Most of us live in cities and have no garden of our own. Guerrilla gardening is a battle for resources, a battle against scarcity of land, environmental abuse and wasted opportunities. It is also a fight for the freedom of expression and for community cohesion. -p16

Growing food is a highly uplifting experience. It can be a spiritual as well as edible antidote to an otherwise debilitating environment. Detainees in Guantanamo Bay have been guerrilla gardening as a diversion from their incarceration. One of them is Saddiq 754, a Uighur from Afghanistan, who has been held in the Camp Iguana section since 2002. he built his garden in the grounds of the prison by softening the sun-baked soil with water at night and gradually scratching away at it with a plastic spoon until he had enough soil to plant seeds saved from meals. he and fellow inmates have grown watermelon, peppers, garlic, cantaloupe and even a tiny lemon plant. Saddiq’s lawyer had regularly pressed the Joint Task Force Guantanamo to build the prisoners a garden, but they had refused. -p37

(Earliest widely publicized act of ‘guerrilla gardening’ in recent Western history)
Leader – impoverished textile merchant, Gerrard Winstanley. Calling for England’s unjust land rights to be corrected, he rallied a group of men and women who became known as the Diggers.

From Gerrard Winstanley’s pamphlet of 26 March, 1649:
An Appeal to all Englishmen to Judge between Bondage and Freedom

“The common Land hath laid unmanured all the days of his Kingly and Lordly power over you, by reason whereof both you and your fathers (many of you) have been burdened with poverty. And that land which would have been fruitful with corn, hath brought forth nothing but heath, moss, turfs…”

On 1 April 1649, he was guerrilla gardening on St George’s Hill, in Surrey. Heath was burned to clear a patch for planting, and parsnips, carrots, beans, and barley were sown. Up to 30 men at once dug during the day.

Winstanely’s message was that no one should have more land than they could labour themselves, and that labour should be shared, not hired. In his most focused pamphlet, ‘The True Levellers Standard Advanced‘, he stated his reasons:

“That we may work in righteousness, and lay the Foundation of making the Earth a Common Treasurey for All, both Rich and Poor, That every one that is born in the land, may be fed by the Earth his Mother that brought him forth, according to the Reason that rules in the Creation.” -p99

“The Work we are going about is this, To dig up Georges-Hill and the waste Ground thereabouts, and to Sow Corn, and to eat our bread together by the sweat of our brows”.

The Diggers on St George’s Hill were chased into Walton church and imprisoned there, their crop was dug over, and they had their spades stolen and their carts smashed. -p100

The Law of Freedom in a Platform – 1652 Winstanley’s vision for a Utopian world.

Park between Dwight Way and Haste.

News of the People’s Park had reached the mansion of the Governor of California, Ronald Reagan, who took serious objection to the guerrilla gardeners’ frontier spirit. He labelled them ‘communist sympathizers’ and ‘sexual deviants’ and made plans to eject them.

In the twilight hours of 15 May one hundred California Highway Patrolmen and armed police arrived to close the park. They surrounded it with and eight-foot-high chainlink fence hung with ‘No Trespassing’ signs. That morning the San Francisco Chronicle quoted Reagan as saying, ‘If there has to be a bloodbath, then let’s get it over with.’ -p104

It became what is known as Bloody Thursday. The angry mass turned a fire hydrant against the police and threw bottles and rocks. Shots were fired and James Rector, a bystander watching from a rooftop, was killed, another man was blinded and more than a hundred were injured. Reagan declared an official state of emergency and summoned the National Guard. -p106

The term ‘guerilla gardening’ was invented in 1973 by Liz Christy, a young oil painter living and working in New York. Liz noticed tomato plants growing in mounds of trash that littered derelict lots in her neighbourhood. Taking inspiration from what they saw, Liz and her friends scattered their own seeds in vacant lots and planted empty tree pits. -p107

Francis Ona from the Pacific island of Bougainville described himself as an ‘ecological revolutionary’. His right was against the economic exploitation and environmental degradation of the island of Rio Tintos by the Panguna copper mine. Although his first act in 1988 was a violent one — he blew up the mine — he and the Bougainville Revolutionary Army survived the subsequent bloody civil war and decade-long blockade by putting a lot of effort into gardening. They grew food and fuel and were particularly adept with coconuts, which powered their vehicles and generators. -p22

Chiquita Brands International banana plantation closed and taken over by the workers.

By breaking rules, guerrilla gardeners are challenging the conventions of society. Doing so in public space is a direct rejection of our political environment. As guerrilla gardeners most of us fight within a democratic society, a structure that is meant to be sufficently free to hear opinions and accept them if the case is compelling. We are also mostly participants in a capitalist system, where everything has a price and resources are traded.

Most guerrilla gardeners evade the pigeonhole of political affiliation. -p246

Click here to cancel reply.
« Swine Flu Hoax
Natural Diet – Masanobu Fukuoka »
We use cookies to ensure that we give you the best experience on our website.
If you continue to use this site we will assume that you are happy with it.