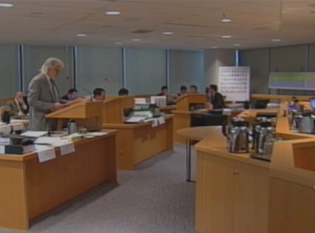 The room the inquisition (I mean inquiry) is held in has low ceilings with many florescent lights. Although there are huge windows all around the room, the blinds are drawn down tightly. Cold canned air is blasted constantly. I am one of the many people who are sensitive to florescent lighting and after a day in the room I was experiencing all kinds of discomfort. Side note: It is well known that for people who are traumatised this type of lighting is stressful and damaging, for people who are trying to think clearly this type of lighting dehydrates and scrambles your brain. A pretty stupid room to use for such an inquiry. 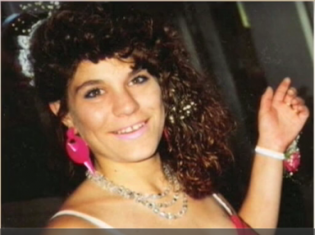 There weren’t very many people observing the proceedings. 10 or so family members of the missing and murdered women in the front three rows on the right, directly behind a poster with the images of 25 of the murdered women. Dotted around the room were some older white women. There was a loud mouthed overconfident fellow who had a couple ladies in tow, frantically taking intensive notes. The comments coming out of this fellow’s mouth revealed he was most likely a member of the Vancouver Police Department.

Within 30 minutes of observing the ‘cross-examinations’ of the two witnesses it was clear that they had been instructed to deny any racist behaviour on their part and to direct attention to the incompetence of the Missing Person’s Department. The commissioner sat behind his big desk looking bored to tears. I even noticed him falling asleep a couple times after lunch. After a while he shook himself and complained to the lawyer that he had heard this before and her time was up. My question was “Why is there an over-the-hill white man presiding over these hearings?” The fellow clearly should have retired at least a decade ago. He soon showed his true colors as he shut down any line of inquiry that delved deeper into what was going on in the Vancouver Police Department. His main interest was to point the inquisition (sorry inquiry) towards simple incompetence and lack of interest by the VPD in the Missing Person’s Department.

“They are just hookers, why would we waste valuable time and resources on them? You can’t rape a hooker.” -VPD

For example, when the sex-worker’s lawyer Jason Gratyl started a line of questioning that pointed towards more insidious “negligence” on the part of the VPD (was the VPD paid by organised crime to look the other way? Or was it even more involved than that?) the commissioner managed to rouse himself from his near slumber and shut him down. “Your out of time. I don’t understand where your line of questioning is going. I’ve heard this all before.” Were his grumpy and impatient comments.

Wow! Yes, the inquiry is indeed a disgusting farce. Since even I (after being there for only a couple hours) could tell where the line of questioning was going this was clearly a blatant lie for an experienced judge. As a couple witnesses pointed out racism and sexism are systemic throughout the VPD–with detectives imitating drunken aboriginal women for laughs in the office–why would we expect anything less from a judicial system which is so completely a hierarchical institution?

In the meantime, the overconfident member of the audience who was clearly related to the VPD in some manner was making snide comments about the civilian witnesses on the stand, a perfect example of the sexist and superior attitudes of certain members of the VPD. 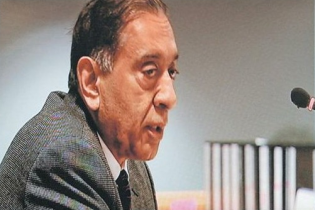 There were some suggestions and recommendations made to the commissioner about what could be done to improve the Missing Person’s Department system, which mostly focused on getting more red tape involved, spending time training the department to be more “politically correct” and whatnot. This seemed to be the delight and joy of the inquiry. “What can we do to make our broken system work better?” Here’s a suggestion, scrap the whole damn thing. The way things are being swept under the carpet gives credence to the argument that the cops are a big part of the problem in the first place.

It became clearer and clearer as the proceedings went on that nothing significant is gonna come out of it. The VPD will probably get a little spanking, have to put in a couple of “Culturally sensitive trainings” for their staff, and wash their hands of the whole thing. If we’re lucky maybe one detective will get fired, but I doubt even that will happen at this rate. It is blatantly obvious that the commissions mandate is to not let the inquiry expose the VPDs part in the murders of the missing women.

I left feeling disgusted and powerless but not really surprised. If I felt this way–a person not personally connected with any of the women, how much more damaging is this whole process to the families of the murdered women themselves? After going through 15 years of the “usual run-around” which the Missing Person’s Department was notorious throughout VPD for, these families are now being bounced around once again.

Back down on the streets of Vancouver I picked up a newspaper touting how much money the Vancouver Police Department had just saved from the Canuck’s failure. 1 million dollars was put aside for policing the streets during the games. Oh I felt like puking. 1 million dollars to protect the poor Hudson Bay Company from having its windows bashed in again. In the meantime no money could be found to protect sex-workers, in fact no money could be found to even pay for lawyers to represent the families of the murdered women.

Walking the streets of downtown Vancouver in amongst the rushing hordes of wage-slaves I noticed the apathy and lack of interest in the general population towards the plight of the missing and murdered women. People on the subway thumbed through newspapers, mindlessly flipping past the article on the Missing and Murdered Women Inquiry without blinking an eyelid.

Where are the hordes of Vancouver bloggers who should be focusing attention on this issue? And even more disheartening… Where are the Occupy activists? The true owners of this land are literally having their children thrown to the pigs and all the Occupy movement here can do is organise a May day parade where they can smoke pot, feel good and pat themselves on the back for being so “involved in the issues.”

Wake up Vancouver. The true issue is here. Your police are involved in a huge cover up of their involvement in the serial murders of scores of women. Your apathy is exactly what the VPD and the inquiry is counting on to get away with this disgusting farce. If the Vancouver Police Department’s involvement is fully exposed everything else will come unravelled. What is the point in intellectualising about a better world, when right on our doorstep women are disappearing and being murdered in most disgusting ways.