Canadian Dairy Cartel: Why is Our Milk So Expensive? 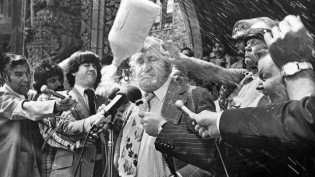 As the article explains, it isn’t just dairy — certain people are making a lot more money than they should be off of basic food-stuffs here in Canada. At the same time they are dictating how we get our milk. One thing I have never understood is why we have to get our milk pre-cooked, and yet we can get raw eggs, raw meat etc (well not for long if the irradiation companies get their way). We should have a choice, we should be able to know which cow we get our milk from and how it has been treated if we want to. Our cowshare, for example has talked to all the local politicians about this issue and it is completely ignored because they are all in the pockets of these agricultural cartels. Big business is sucking our life-blood. We need to go back to local small-scale artisan dairies, this system supported the huge population of India for thousands or years and is much safer than the massive unhealthy factory farms of industrial dairying. Not only is the milk unsafe (the province of British Columbia has declared all of their raw milk a hazardous substance, the only place in the world to do so) but the cows are diseased and the workers mistreated. Let us choose a better option for everyone except the damn greedy corporations and governmental cronies that support them for once. (Sorry for the rant, but read the article and you will be ranting too.)

Time for Jim Flaherty to talk ­turkey about marketing boards

By Philippe Bergevin and Finn Poschmann

With an eye on the Christmas shopping season, Finance Minister Jim Flaherty last fall stood up for “irritated” Canadian consumers who persistently complained about high retail prices at home when cheaper buys were to be had south of the border. But rather than reducing barriers to cross-border bargain hunters searching for competitive prices, for example by increasing duty-free limits, the Minister pressed the Senate national finance committee to severely investigate.

Now, when the mail is bringing statements that report in black and white on our successes and failures in finding Christmas bargains, Statistics Canada has released a report that looks across many years and captures changes in the relative prices of a wide range of goods and services on each side of the border. Unsurprisingly, many things cost more in Canada — and as travelling shoppers have noticed, a high loonie does not seem to quickly bring down relative prices. Other things, though, cost relatively less here, all the more so when the loonie is low.

For the basket of goods and services covered by the StatsCan report, median prices in Canada in 2010 were about 24% higher than in the United States, adjusting for the exchange rate. That is a big number, one likely worth being irritated about. But how persistent is the difference, for what things, and how do prices adjust?

The biggest impact on trends in price differentials is the exchange rate or, more precisely, the slow pace at which retail prices adjust to changes in it. There is a lag — prices are sticky. And some price tags are stickier than others: retailers, for instance, are notoriously reluctant to reduce, say, book prices, any more quickly than consumers force them to, by taking their business elsewhere.

With the loonie hovering around parity with the greenback for the last two years or so, it is reasonable that Canadians consumers might expect to pay similar prices to their neighbours. But retail prices are the result of a complex dynamic, which includes supply and demand conditions, and the exchange rate is just one of the many factors affecting them. Retailers generally will tend to smooth out price changes, and likely will take advantage of consumers’ dislike of price volatility.

What the new data make plain, however, is that it works both ways. When the Canadian dollar was in the doldrums a decade ago, things were different: in 2002, prices overall were 9% cheaper in Canada.
Advertisement

Not all kinds of goods and services behave the same way: Some prices are regularly higher or lower in Canada. For services overall — anything from a haircut to a restaurant meal — Canadians consumers tend to get a relative bargain. Looking over the 1985 to 2008 time frame, prices for services in Canada averaged about 95% of prices in the United States. Prices for long-term investment goods, like machine tools, televisions, trailers and tugboats, are pretty similar most of the time. Adjusting for exchange rate differences, prices in Canada were about 98% of those in the United States.

But some of the prices StatsCan reported on were consistently higher in Canada, and what is striking about them is that they included prices for goods over which Canadian governments have very high degrees of control: alcohol and tobacco products, and food products such as milk and poultry that are at the mercy of marketing boards or government-supported supply management rules. Maybe Minister Flaherty, or the government, is reluctant to make the pitch for cheaper scotch and cigars, and lower taxes on them, but if the government is serious about bringing down consumer prices, it should talk turkey. And eggs, milk, and cheese.

Indeed, all consumers should know that prices for farm goods that are part of the so-called supply-management system — eggs, dairy and poultry products — are mostly determined by the operations of government-mandated cartels. These powerful cartels govern the supply of basic foods: Rigorously enforced production quotas limit what leaves dairy farmers’ gates, and quotas and stiff import tariffs — more than 200% for many cheeses! — block the entry of competing products. This antiquated system nails consumers, and it shows up in Canada-U.S. price differences. Over the long haul, Canadian prices averaged 16% higher than in the United States, putting a big dent in consumers’ wallets.

So Canadians are right to be frustrated over high retail prices — and they should shop around them when they can. Yet sometimes they cannot, owing to shortsighted government policy. Policy is Minister Flaherty’s bailiwick, and his concern over high consumer prices, and the dairy cartel’s impact on voters, would be great food for policy debate, and a great cause for policy action on the part of the federal government.

Another article on the topic: ANALYSIS | 5 reasons to defend farm marketing boards

Click here to cancel reply.
« Left-sided Cancer: Blame your bed and TV?
Kevin Annett on The Republic of Kanata »