Act Now to Stop Smartmeters in BC 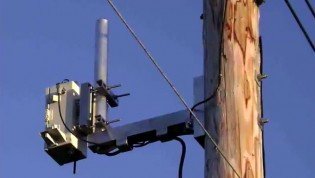 MESH Network by Itron, BC HYDRO and TELUS - Hwy 10, Langley Bypass, Langley BC

Message just in from the www.stopsmartmetersbc.ca updates:

“Smart meters set to be installed Jan 25/26 at 3663 Crowley Dr Vancouver, BC. Got notice on door yesterday night.”

When we got our letter it was much more vague, with a two week interval possible. Then a couple days later our power abruptly shut off for about 30 seconds and came on again. We were puzzled and then I knew what had happened. I rushed downstairs to find the Corix van driving away. I can’t find my letter at the moment but I had earlier sent them a very reasonable request to please use a wired meter if they had to put in a new one, as I was sensitive to EMFs. I never use cellphones and we have wired internet. In their response they dismissed my concerns.

I am currently pretty damn pissed because all the work I’ve been doing to protect my own health, the amount of time, money and dedication I have personally put into all of this, is just ignored and set back once again with this outside toxic health hazard. (And they say raw milk is a health hazard! -Nut jobs). These are the people who I am paying $50 a month to protect my health and all they have currently done is protect the very instruments that are endangering my health. I currently have a slight headache and my ears are ringing. This is despite the fact that I am sitting on an earthing mat (which helps tremendously, but doesn’t change the fact that my ears buzz constantly when I’m at home).

There are reports of BC Hydro and Corix (company installing smartmeters) bullying people who are refusing the smartmeters, they have even lied to an old folks home: Seniors deceived by BC Hydro. There have been over 800 reported fires from smartmeters.

The following is a radio show with Josh Del Sol.

Watch the trailer and help to support the making of this film: www.smartmeterfilm.com

If you put a big magnet near the meter it will scramble the signal. You can also put a copper coil around it or buy an analog meter and replace it yourself.

Your life is easily hacked into with wireless networks: Smart meter hacking can disclose which TV shows and movies you watch. Do any of you remember the survey BC Hydro put out a couple years ago asking for every minute detail of your electricity usage? These smart meters will keep track of every movement and this information will be available to anyone who might wanna use it.

Perhaps it is time to say goodbye to BC Hydro completely. I am doing everything in my power to use less power these days and am focused on finding more. Check out this great idea: Equal Energy For All: Can We Democratize the Grid? as another alternative.

Vote in this Poll to say ‘No’ to Smartmeters.

A significant percentage of the population (about 35 percent) feel the effects of RF radiation through symptoms like headaches, confusion, tinnitus, insomnia, fatigue, irritability and dizziness, and flu-like symptoms. A segment of the population, approximately three to five percent, suffer with acute sensitivities to radio frequencies much like allergic reactions that can be quite severe and debilitating.

Despite our war on cancer, reported cases of lung cancer are up 50 percent, breast cancer up 200 percent and prostate cancer up 400 percent. RF radiation has greater effects on children because their bodies are smaller and in the developing stages.

By proceeding with the installation of wireless smart meters, BC Hydro is deliberately and unnecessarily risking the health of thousands of children and adults under the guise of reducing energy usage. Smart Meters: What are the Risks?

Another very valid point is the complaint about the raise in your electric bill with the installation of the smartmeter. Our bill and our neighbours bills went up significantly in the month we had the installation. It wasn’t actually as cold as expected that month so we were actually using our heat less and our neighbour was actually down one occupant since one guy was visiting family for the month. I think they are pushing installation of the meters in the winter months in an attempt to hide the leap in price. Smart meters privatization of profit, socialization of loss

30 municipalities in BC have issued moratoriums against smartmeters.

Click here to cancel reply.
« 2012: Turn Your Back on The Cities of Death
AAEM calls for a halt to wireless smartmeters »