Smart Meters Come to BC 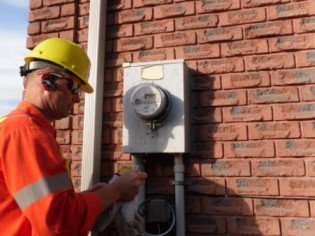 It is BC’s turn to have Smart Meters installed to measure the amounts of electricity we are using on an hour to hour basis. I only found out about this myself earlier this year when Leanne Gypsy, who wrote the post on Natural Motherhood, was telling me about it. Even then it didn’t really sink in. I always manage to somehow feel like these things aren’t going to effect me, that I am somehow gonna be immune. Well the reality of it kicked in when I noticed a post on the NoSmartMeters Facebook page, saying that apartment renters would have absolutely no say on this issue. Suddenly I started paying attention.

Just a couple months ago we went to great lengths to get our computers cabled again, and stop using a wireless network. Not only do we both feel lots better, but our information is more secure.

Click here to Vote and say you are concerned about Smart Meters. (The poll is about half way down the page.)

There are a couple things I want to say, just to get on the same footing here. I absolutely agree that we should all individually do as much as we can to live with a light tread upon the earth, but there is something else going on here. The conversation about smart meters has some faulty assumptions that underlie it, which is distracting us from the real issue when it comes to power usage. The fact is that residential and commercial sector use less than 30% of all power, most of it goes into manufacture for Big Business:

According to the U.S. Energy Information Administration, in 2007, the breakdown of energy consumption worldwide by end-use sector is as follows:

Commercial sector = 7%
(the services and institutional sector – consists of businesses, institutions, and organizations that provide services)

Industrial sector = 51%
(industries including manufacturing, agriculture, mining, and construction, and activities, such as processing and assembly, space conditioning, and lighting)

So 78% of world energy consumption is in the industrial and transportation sectors. We argue that most of this usage is not necessary to the health and well-being of society, and benefits only an infinitesimal slice of the world’s population. Who Really Needs Nuclear Power? Big Business That’s Who 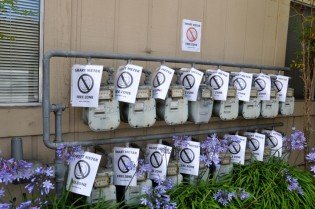 We need to put on the table all of the energy usage and where it is going and open up discussion about where we can make the most efficient changes and which areas we choose to sacrifice in. If we decide it is worth it for us to sacrifice our health in the greater good of making the latest model of car, for example, then so be it, but at least let’s talk about the whole story, not just one third of it.

The end game for the installation of these smart meters seems to be selling us all ‘smart’ appliances, so instead of cutting back on manufacturing etc. as a truly sustainable tool would do, these smart meters will create a new craze for the latest fridge, washing machine etc. Some people believe there is a conspiracy to be found here, but honestly, I think that once again it is just about money, greed and selling us ‘fools’ more crap we don’t need. Perhaps it will create more jobs in China as well.

OK great I got that little rant out! I am an electrically sensitive person (actually I never knew there was a term for it ’til today), so I take this a bit personally. I don’t use cellphones as they make my ear hurt and ring for days. Whenever I am in a wireless cafe, I get a cold sweat and start shivering uncontrollably. Usually my gut clenches up as well. I have noticed that when my gut was particularly damaged I experienced these symptoms more severely. I have also noticed more studies finding that probiotics and a non-permeable gut are a big help. Certain types of fatty acids (arachidonic acid) may also be protective against EMFs, as these low-frequency waves effect cell membranes as well as DNA. The levels of people with digestive problems is sky-rocketing in North America, so I think we will find more and more people becoming hyper-sensitive to wireless frequencies. Children are also more sensitive.

There is supposedly some ‘question’ about whether EMFs negatively effect our health, but the WHO’s International Agency for Research on Cancer released a report on May 31st, 2011, admitting that they are ‘possibly’ carcinogeous to humans. Mae Wan Ho has also just written a very good article that explains clearly the differences between EMF radiation and ionizing radiation, and goes on to explain why these low-frequency signals can be so harmful. She does a much better job of this than I do so please read her article: Non-thermal EMF Effects, in it she explains that EMF effects are often frequency-specific as well as specific for developmental stages. Which makes the situation quite complicated, and very dangerous for growing babies.

I am glad to see Canada’s Green Party taking a strong stance. The following video is a press release from them discussing the issue. The first part is quite good — problems with smart meters are highlighted. The question and answer part is a bit disappointing, there is a reporter who is obsessed with the whole ‘conspiracy’ angle and keeps trying to get someone to talk about that. I also am not so sure that the whole discussion about whether these smart meters will actually be environmentally sustainable is worth getting into, as we really need to take control of that angle of the discussion. Even if the smart meter’s were wired and not so dangerous to health, they still aren’t going to solve our energy consumption problems and as I mentioned above, perhaps we all need to start pointing the finger at the manufacturing industry, so we can actually have a chance at understanding the whole picture before rushing off on another dangerous and wasteful technological goose-chase.

After analysis, what seems to be going on here is that the industry is doing it’s best to steer the conversation to the wired vs wireless aspect of the meters, while going on and on about how these meters are the only best hope humanity has of conserving energy. By doing this they hope to get the smart meters installed using cables, and the show will go on. The industry will have gotten what it wanted all along, and before we know it, it will be mandatory for us to all go out and buy all new household appliances. It’s a big market after all.

Well I do have to admit, there is another angle that must be mentioned, it is not all so innocent. BC Hydro already thinks that they can enter your home without permission if there is suddenly more power being used, so there is definitely some kind of a control thing going on here. Of course they promise to keep your information private and secure, but simply using cable not wireless would be one excellent way to restrict that. The other issue is that there is always someone willing to sell something, and these days hackers can get into anything. The whole thing is very doubtful, and as we have seen from the implementation that has already happened in the US and other countries, the health impacts are devastating.

By the way if you are electrically sensitive, take a look into Earthing, it can be very helpful.