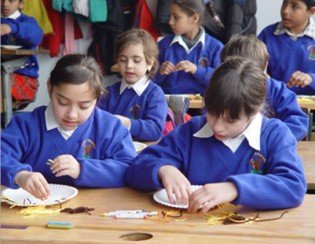 On my bus ride this morning I started reading the back of the newspaper of the guy opposite me. As I scanned down the page I was surprised to see the headline: Innovative BC School Protects Student Health and Saves Money. “Wow”, I thought as I leaned forward to read the rest of the article, “saving money and protecting health–this is true innovation these days!”

The article described how many schools have become concerned about the issue of wireless networks’ affect on children’s health–how they damage DNA as well as the potential for cancer problems further down the line:

Barrie Trower, a specialist in microwave “stealth” warfare during the Cold War, has been giving lectures about the dangers of Wi-Fi in schools and says he fears that low-level microwave can damage girls’ ovaries, according to the Postmedia News story. “You are not just risking the current health of your children, you are risking the future generations of your children in your country with genetic disorders,” he’s quoted as saying.

Fraser Health has, of course, come out with a statement saying that there is no danger for children from wireless networks — once again proving they are more interested in protecting corporations’ profits than our health and the health of future generations.

As I read down further I was even more amazed to find that the South Surrey school mentioned had not only committed to using only wired computer systems, but they had decided to use the cutting-edge open-source operating system Ubuntu on all their computers! Ubuntu is especially useful for schools, it turns out, not only because it is open-source and therefore completely free, allowing more resources to be put into teachers and the hardware itself, but it also provides a wide range of free software programs. It also teaches the kids to get in the habit of giving feedback when there is a bug or issue that they need help with. This is particularly useful for a learning situation, helping to teach kids not to fear mistakes and do whatever they can to avoid them, but instead helps kids to learn to innovate and think creatively–interacting and understanding their tools instead of becoming slaves to them.

Ubuntu is also welcomed for use in schools and for school kids because you not only don’t have to worry about viruses attacking computers if the wrong button is accidentally clicked but there are also no games supported on Ubuntu. Well there are a couple–majong and solitaire–but since there is no money involved the gaming developers prefer to take their expertise elsewhere. There are plenty of other benefits associated with using Ubuntu, but the article was mostly interested in how important going wireless-free is for students ability to function optimally in school as well as how important it is to protect our children’s health especially in their school environment.

While cell phones and WiFi both emit RF radiation, they do so using different frequencies. WiFi frequencies, which are transmitted in the range of 2.4 GHz to 5 GHz, are much higher than those utilized for cell phone RF transmission, at 850 MHz to 1900 MHz; WiFi transmissions can also carry more data. While RF exposure levels from WiFi are much lower than for cell phones, people tend to spend many more hours using WiFi, especially if at school or work. These differences all impact how WiFi affects health. Source

Children are more susceptible to radiation from cellphones and wireless networks in general and get plenty of exposure to both of these in our modern world. Many of them are already using cellphones themselves.

The article pointed out that another school in Surrey has already taken the step to go wireless-free, preferring to be safe than sorry when it comes to their children’s health. The article also mentioned that in Europe and the UK schools in 2007 dropped their plans to go wireless when studies came out showing that wireless networks, cellphones etc cause damage to children’s health:

The BioInitiative Working Group found significant evidence of harm: cancer (including childhood leukemia), nerve and brain damage, DNA damage, increased stress response, and decreased immune response. All of these effects were found at levels of radiation well below the current standards.

Almost immediately upon the report’s release, the European Environment Agency called for action to establish appropriate levels of exposure to minimize risk. Source

Check out this informative PDF on wireless networks in schools.

Suddenly the bus jolted and I woke up wiping some drool off my chin. I glanced over at the seat opposite me. There was a young girl jabbering on her cellphone and no sign of anyone with a newspaper. As my head cleared and I came to my senses I realised I was still living in the Dark Ages of e-smog, and that it was all a dream. The ideal world of education that I had momentarily been a part of was still something we have to fight for to protect our children and future generations.

With the terrible nuclear situation unfolding in Japan and the potential of the radiation released from these facilities to seriously effect our world, it is important not to put any more pressure on our bodies by getting infatuated with these dangerous new toys. Our children are not guinea-pigs to test these new technologies on–cellphones and wireless are not something to treat lightly. I know that someday my dream will come true, but I hope it will not be the result of a leukemia epidemic in teenagers a couple years from now.